Preface: This is only a summary of the life of Zaid Al-Khattab (RA) and does not cover all the points of his life story. It is not intended to be a biography, but rather a glimpse of the main incidents of his life so that we can get an idea of his character. For ease of reading, we have not inserted “May Allah be pleased with him (RA)” each time his name or the name of each Companion is mentioned, but please take it that the salutations apply to all of them, may Allah be pleased with them all.

One day the Prophet SAW sat with a group of Muslims, and while they were talking, the Messenger paused, then spoke to those who were sitting around him saying, “Among you there is a man whose molar in He is greater than Mount Uhud.”

Fright and terror appeared upon the faces of all those present because each one of them was afraid lest he should be the person about whom the Prophet SAW prophesied a dreadful end.

Years passed and all those Companions met their ends as martyrs except Abu Hurairah and Ar-Rajjaal Ibn Unfuwah, who were still alive. Abu Hurairah was extremely terrified by that prophecy and did not feel comfortable until fate revealed the secret of the unfortunate man: Ar-Rajjaal Ibn Unfuwah, who apostatised from Islam and joined Musailamah the Liar, and thus witnessed the fulfilment of prophecy upon him.

One day, Ar-Rajjaal Ibn Unfuwah went to the Messenger of Allah SAW and acknowledged him and learned the teachings of Islam. Then he went to his people and did not return to Medina till the death of the Prophet and the choice of As-Siddiq as the Caliph of the Muslims. Ar-Rajjaal told Abu Bakr the news of the inhabitants of Al-Yamaamah and their support for Musailamah and proposed that he be sent to Al-Yamaamah as an envoy in order to confirm Islam among them! The Caliph gave him permission. Ar-Rajjaal went to Al-Yamaamah, and when he saw the numerous supporters of Musailamah, he believed that they would be the victors. His perfidious nature caused him to reserve a place in the prospective state of Musailamah. Consequently, he apostatized from Islam and joined Musailamah, who promised him a prosperous future.

Ar-Rajjaal was more dangerous to Islam than Musailamah himself because he exploited his previous association with Islam and the period he had lived with the Messenger in Medina, memorizing many verses of the Holy Qur’an, and his intercession to Abu Bakr, the Caliph of the Muslims. Ar-Rajjaal exploited all those things for evil purposes and cunningly supported and confirmed the sovereignty of Musailamah and his false prophethood.

He walked among people saying that he heard the Messenger of Allah say that he had taken Musailamah into partnership and when the Messenger SAW died, he was worthy of carrying the banner of prophethood and revelation after him.

The number of Musailamah’s supporters increased to a great extent because of the lies of Ar-Rajjaal and his cunning exploitation of his previous relationships with Islam and the Messenger SAW. When the news of Ar-Rajjaal reached Medina, the Muslims were exceedingly angry because of the lies of this dangerous apostate who used to mislead people. His evil words and deeds expanded the range of the war and intensified the conflict the Muslims had with their enemies and adversaries. The most anxious and the most eager to meet Ar-Rajjaal was Zaid Ibn Al-Khattab, whose heroism and fame was outstanding in the biographies and books of Islamic history.

I am sure that you have heard about Zaid Ibn Al-Khattab. He was the brother of Umar Ibn Al‑Khattab. Yes, he was his elder brother. He was older than Umar Ibn Al-Khattab and he embraced Islam and gained the honour of martyrdom before him.

He was the ideal hero whose motto was ‘Actions speak louder than words.’ His faith in Allah and His Messenger and His religion was strong and firm. He never stayed away from the Messenger in any setting, and in every battle he sought martyrdom more than he sought victory.

On the Day of Uhud, when the fight between the believers and the polytheists was very fierce, Zaid was fighting boldly. His brother Umar Ibn Al-Khattab  saw him as his shield fell down and he was within reach of the enemies. Umar cried, “O Zaid, take my shield and fight with it!” Zaid replied, “I want martyrdom as you want it.” He continued fighting without his shield with astonishing heroism.

As we mentioned before, Zaid was longing to meet Ar-Rajjaal, wishing to put an end to his devilish life.

In Zaid’s opinion, Ar-Rajjaal was not only an apostate but also a hypocrite and self-seeker. Zaid was like his brother Umar Ibn Al-Khattab in his abhorrence of hypocrisy and lying, especially when hypocrisy aimed at selfish gain and mean purposes. For those mean purposes Ar-Rajjaal committed his atrocious acts, resulting in the numbers of Musailamah’s supporters greatly increasing and causing great numbers of deaths in the Apostate Battles. First he deceived them, and finally he led them to their deaths for the sake of his devilish hopes.

Zaid prepared himself to conclude his faithful life by annihilating that impiety not only in Musailamah’s person but also in Ar-Rajjaal Ibn Unfuwah, who was more dangerous and more cunning.

The Day of Al-Yamaamah began gloomy and dim. Khalid Ibn Al-Walid gathered the Army of Islam and directed it to its positions and left the leadership of the army to Zaid lbn Al-Khattab, who fought Bani Hanifah, the followers of Musailamah, boldly and fiercely. At the beginning, the battle was leaning towards the side of the polytheists, and many of the Muslims fell as martyrs. Zaid saw the feelings of horror in the hearts of some Muslims, so he climbed a hill and cried, “O people! Grit your teeth, fight your enemy and go straight By Allah, I’ll never speak till Allah beats them or I meet Him and then I give my evidence.” Then he descended, gritting his teeth, pressing his lips, never moving his tongue with even a whisper.

His only hope was to kill Ar-Rajjaal, so he began to penetrate the enemy army like an arrow searching for its target, until he saw him.

Then he began to attack him from right and left. Whenever the deluge of the battle swallowed Ar-Rajjaal and hid him, Zaid dived towards him until the waves pushed him to the surface again. Zaid approached him and stretched out his sword towards him, but the furious human waves swallowed Ar-Rajjaal again. Then Zaid followed and dived after him so as not to allow him to escape.

At last, Zaid held him by his neck and with the sword, he cut off his head which was full of vanity, lies, and villainy. By the death of the great liar, the ranks of its whole army began to fall. Musailamah and Al-Mahkam lbn At-Tufail were filled with horror. The killing of Ar-Rajjaal spread in Musailamah’s army like a fire on a stormy day.

Musailamah used to promise them inevitable victory and that he, Ar-Rajjaal, and Al-Mahkam Ibn At-Tufail would promulgate their new religion and establish their state on the day following their victory! Now that Ar-Rajjaal was killed, the whole prophecy of Musailamah was seen as a lie, and tomorrow Al-Mahkam and Musailamah would meet the same fate. Thus the fatal blow of Zaid Ibn Al-Khattab caused all that destruction in the lines of Musailamah.

No sooner did the Muslims hear the news than they were filled with pride and dignity. The wounded men rose again holding their swords, taking no interest in their wounds.

Even for those who were about to die, nothing connected them with life except that very faint light caused by hearing the good news which was like a very beautiful and rosy dream. They wished, if they had any strength to fight with, they would be able to witness the triumph of the battle in its glorious conclusion. But how could that be? Since the doors of Paradise had opened to welcome them, they were now hearing their names while they were being called to immortality!

Zaid raised his hands towards Heaven supplicating Allah and thanking Him for His blessings. Then he returned to his sword and his silence, as he had sworn by Allah not to utter a word until he had completed the victory or gained the honour of martyrdom.

The battle began to lean to the side of the Muslims and their inevitable victory began to approach rapidly. At that moment Zaid did not desire a better conclusion to his life than praying to Allah to grant him martyrdom on that Day of Yamaamah! The wind of Paradise blew to fill his soul with longing, his eyes with tears, and his determination with firmness. He began to fight as if he were searching for his glorious destiny, and the hero fell. So he died a martyr, magnanimously, gracefully and happily. The Army of Islam returned to Medina victorious.

While Umar and the Caliph Abu Bakr were welcoming those who were returning triumphantly, Umar began to search for his homecoming brother with longing eyes.

Zaid was so tall that he could be easily recognized. But before Umar had strained his eyes, one of the returning Muslims approached and consoled him. Umar said, “May Allah have mercy upon Zaid, he preceded me in two instances. He embraced Islam before me and gained martyrdom before me, too.”

In spite of the victories that Islam won and enjoyed, Umar ‘Al Farooq’ (Umar) never forgot his brother Zaid, and he always said, “Whenever the east wind blows, I smell the scent of Zaid.”

Yes! The east wind carries the perfume of Zaid. But if the caliph gives me permission to add these words to his great expression so as to complete the meaning of his saying, these are the words. “Whenever the winds of triumph blow on Islam since the Day of Al-Yamaamah, I am finds the scent, the struggles, the heroism, and the greatness of Zaid in these winds!” Blessings be upon Al-Khattab under the flag of the Messenger SAW. Blessed be they the moment they embraced Islam. Blessed be they when they fought and were martyred. And blessings be upon them in the hereafter. 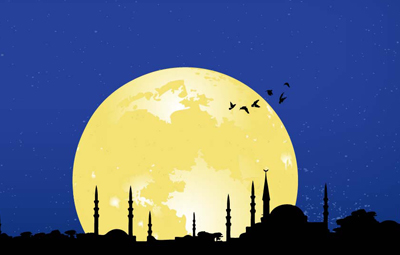