Qur’anic Reflection: “Let Go and Do Not Fear”

Sometimes, the most outstanding realizations about life could manifest themselves so clearly as we go through the pages of the Qur’an and contemplate its meanings.

The power of letting go of attachments and the spiritual fruits of this act has never been so clear to me, until the following incident took place.

A friend of mine was memorizing Surat Taa-Haa (Chapter 20 of the Noble Qur’an), and we decided that she will recite what she memorized by heart to me.

She started reciting the first two pages, and when she was done, I asked her “what was the part that touched you the most in this Surah so far?”

Without hesitation, she referred to verses 17 to 23… and she started reciting them again:
“And what is that in your right hand, O Moses?” He said, “It is my staff; I lean upon it, and I bring down leaves for my sheep and I have therein other uses.” [Allah] said, “Throw it down, O Moses.” So he threw it down, and thereupon it was a snake, moving swiftly. [Allah] said, “Seize it and fear not; We will return it to its former condition. And draw in your hand to your side; it will come out white without disease – another sign, That We may show you [some] of Our greater signs.” [Qur’an: Chapter 20, Verses 17-23]

My friend said that she was astonished at how Allah [swt] allowed Prophet Moses (peace be upon him) to list all the good aspects and the benefits of his staff, and right after he did that, Allah ordered him to throw it down!
Imagine if you have something that you’re attached to, something you love or depend on so much in your life… and you were asked to mention why it’s important to you. Right after you do that, you get asked to throw it away.

How would you feel?

But Moses (peace be upon him) didn’t object to Allah’s order. He didn’t say, “But why would I throw it down? I need it! It is so beneficial to me. Why would you take away something that I need?”

Rather, Moses was patient and he obeyed. When he did that, he was taught great lessons.

The beauty here is that Allah didn’t just take away something that Moses found beneficial, rather, Allah [swt] taught Moses that what Allah can take away, He can replace with something much better, bigger and more significant!
Allah taught Moses that he will not only get his staff back the way it was, but also he will get something that becomes a major ‘ayah’, a sign that guides and enlightens many people.

This is such a deep and inspirational message to us.

SubhanAllah, I then recalled how many times we get attached to people, things or dreams… but sometimes Allah teaches us to let go of those things… just like He asked Moses to “throw it down and do not fear”.
We get depressed, turn away from Allah [swt], or even get angry at Him because of what we’ve lost, while in fact He may be preparing us to receive greater gifts and learn greater lessons about life and about Him!

I recalled how another friend of mine was in a relationship with someone she was attached to deeply. Shortly after, this relationship ended so harshly. Something that she was attached to strongly and considered the purpose of her life, was taken away so harshly. She thought her life ended. While this was painful to her at first, it forced her to start memorizing the Qur’an to find solace, and also to pursue an Islamic degree…. Something she never contemplated before.

In a brief period, she completed the memorization of the entire Qur’an and earned an Islamic degree to teach many people about their deen. Her character transformed entirely and she found peace, wisdom and grew greatly as a woman. Right after, she found another righteous partner who is even more concerned about her, about the deen and about walking with her on this path.

The message is: when you’re asked to let go, or when you are forced to let go, do not fear and do not think this is the end of the world. Allah can bring back whatever He asked you to leave, and on top of that, teach you one of His signs.

At this point, I also remembered that the same instructions of “letting go” were asked of the mother of Moses!
“And We inspired to the mother of Moses, “Suckle him; but when you fear for him, cast him into the river and do not fear and do not grieve. Indeed, We will return him to you and will make him [one] of the messengers.” [Qur’an: Chapter 28, Verse 7]

This is a believing woman who feared for her son. She was then inspired to throw him away… in the river!
Throw her son away in the river… This may sound extremely painful. Throwing away a piece of you, letting go of someone you love, especially that she had no idea what would happen to him next.

But then what happened?

Not only did Allah bring him back to her, but He made him a Prophet, a major sign of God that would help, inspire and enlighten many people until the end of time.

Just like Moses and just like his mother, when you are asked to let go…let go and do not fear!

If you are patient and you put your trust in Allah, you will see His Wisdom, you will receive more than you have lost, and you will witness a sign from Him… even more worthy than whatever mortal thing you’ve attached yourself to in the first place. 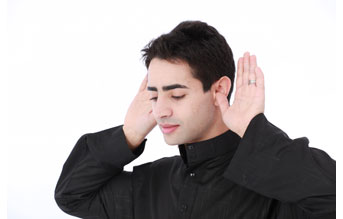 When do we need Allah the absolute most?